Welcome to an Education for Life

Welcome to Doane Academy. Students at Doane have flourished on our beautiful campus along the banks of the Delaware River since the school’s founding in 1837. But our identity is shaped as much by our present and future as it is by our venerable history. As our mission states, Doane is a school where students are all known, loved, and strongly encouraged to reach their unique potential. In this sense we are traditional; we are proud to be a small school that honors our traditions while celebrating our ability to both nurture and challenge a diverse group of students. But we are also a school that is innovative, forward thinking, and demanding. 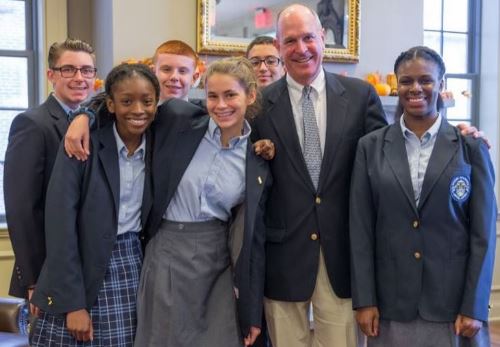 We believe that the combination of a rigorous academic program with a strong emphasis on leadership and character development produces students at Doane Academy who are ready and able to make meaningful, positive change in their communities. They do so with the support of a school family in which each member – from the youngest student in our Primary Program to seniors preparing to embark on the next leg of their educational journey -- is cared for and sustained with love, compassion, and respect. We look forward to greeting you on your visit to our campus so you can learn more about the extraordinary difference that a Doane education can make in your life.

George B. Sanderson
Head of School

George Sanderson was appointed Head of School at Doane Academy in 2015. He is a graduate of the Noble and Greenough School in Dedham, Mass, earned his undergraduate degree in History from Princeton University and his masters from the University of Pennsylvania. After college, he worked in the corporate finance field for eleven years both in New York and in London prior to pursuing his career in education. Before coming to Doane Academy, Mr. Sanderson held a variety of teaching and administrative positions at Princeton Day School, including History department chair, upper school dean, and director of financial aid. At Princeton Day School, Mr. Sanderson was the recipient of The Robert C. Whitlock Award for Distinguished Teaching, the Stanton Foundation Innovation in Civics Program grant, and The David C. Bogle Award for the Pursuit of Teaching Excellence. He has served as chair of the National Association of Independent Schools’ financial aid committee, as a trustee of several nonprofit organizations, and currently serves on the executive board of the Friends of the Institute for Advanced Study in Princeton. He and his wife are the parents of three children: twins who are students at Northwestern University and Cornell University, and a son who is graduate of Duke University, and who is now working as a management consultant in Boston.