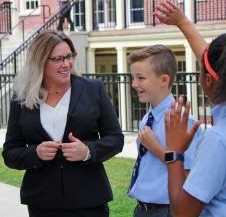 I was thrilled some years ago when Doane Academy's administration decided that all Lower School students would be attending Spanish class five days a week. This bold decision was another step towards our goal of graduating students who are confident, fluent Spanish speakers. There are obvious practical advantages of speaking a second language: being able to communicate with a wider range of people, getting a head start on language requirements for college, and enjoying increased employment opportunities in a global job market. In recent years, research has shown that the benefits of bilingualism span far beyond these real-world benefits. In short, many brain researchers and linguists agree: learning another language makes you a more dynamic learner, especially when you start at an early age.

According to the Center for Applied Linguistics, learning a second language at a young age has a positive effect on intellectual growth and cognitive development. Their research suggests that students who receive second language instruction are more creative thinkers and better problem solvers than monolinguals. Bilingual brains have been described as more agile and quicker than those of monolinguals. Some researchers have even reported that bilingualism helps ward off the onset of dementia and Alzheimer's disease later in life. Students who are exposed to a second language are constantly trying to think in two language systems, which increases flexibility of thinking and creates a greater sensitivity to the subtle nuances of language. Early learners of language are better listeners and are likely to commit new words to memory more quickly, thus developing a more varied vocabulary.

Second language learners are always being exposed to new comprehensible input in the target language. The cognitive function required to organize this information forces students to categorize words and think critically about how to apply this knowledge in different situations. This complex mental task of efficiently processing new information can be applied to all academic areas.

In our Spanish classrooms, students are required to take risks. In other words, they are expected to communicate their ideas even when they aren't completely sure of the "right" answers. The multilingual student is better equipped to handle ambiguities and less likely to give up when a task is challenging or confusing. Students come to the understanding that learning a language is an ongoing process filled with both challenges and successes, with the focus on comprehensibility over accuracy and growth over perfection. I like to think of Spanish class as a place where students feel comfortable when they are confused. While being presented with complex material, students face the challenge with a sense of "I don't understand this...yet." One could say that the growth mindset is the driving force behind learning in a language classroom.

During Spanish class, most young children are not thinking about their brain function and cognitive development, nor can they articulate how the learning process in Spanish class helps them comprehend and retain information in other classes. Instead they tend to focus on the sense of pride and accomplishment they feel when they can communicate with another person in a new language. The long-term cognitive and academic benefits are rewards that they may not truly appreciate for years to come. The Spanish teachers at Doane are working hard to ensure that all language learners are collecting the benefits of their daily instruction in the target language. I am proud to work at a school that recognizes the importance of early language learning and why it needs to happen five days a week.